Coral reefs does a lot for the aquatic ecosystems than we could ever imagine. Apart from its beauty and the millions of dollars it generates through tourism, coral reefs also play other major roles. They usually act as a shield to our coasts from storm surges. They also form the habitat for a huge number of aquatic animals in the ocean. Coral reefs can be found in all the world’s oceans as they find conditions to thrive in them. In this article, we are going to discuss four main types of corals. They are fringing reefs, barrier reefs, atoll reefs, and patch reefs.

These reefs are the most popular type of coral. The usually grow close to the shorelines of islands and even the mainland. A shallow lagoon forms the barrier between the reef and the coastline.

These reefs usually consist of two sections. These sections are the reef flat which are nearest to the coastline and the reef slope which is much further from the shore. Majority of the aquatic species that live on these reefs usually thrive along the slope.
The most dominant fringing reef on the world is the Ningaloo Reef. You can find it along the Australian west coast. It covers an area of over 160 miles. A unique marine ecosystem exists here as it forms the habitat for a number of distinct aquatic species.

It is a deep water lagoon that forms that barrier between the reef and the coast. Just as their name suggests, they are usually detached from the mainland by a barrier.

The most popular barrier reef is the Great Barrier Reef. It comprises of a series of smaller barrier reefs close to the shores of Australia. You will only find a single barrier reef in North America. This reef is under the management and protection of the Florida Keys National Marine Sanctuary.

They usually appear as circular reefs situated out in the ocean. Formation of these reefs usually occurs when fringing reefs flourish around volcanic islands which eventually submerge into the ocean.

These reefs usually take the shape of a horse-shoe. You will always find a lagoon at the center of these reefs. The atoll reef that you will find on the northern extreme of the planet is Kure Atoll. This reef is located inside the Papahānaumokuākea Marine National Monument.

This reef forms the habitat for majority of sea birds that are found in this region. A number of migrating bird species also live on this reef during the winter season. Its not only birds who get to nest here as this reef is also home to the Hawaiian Monk seals.

Rose Atoll is also among the most famous atolls worldwide. The Rose Atoll Marine National Monument was merged with the National Marine Sanctuary of American Samoa in 2012. This was part of an expansion program that was taking place that year.

They usually comprise of small lone reefs sprouting from the island’s open floor or continental plate. You can find them between fringing and barrier reefs. They are diverse in terms of size. They only reach the water surface on vary rare occasions.

Where can we find coral reefs? 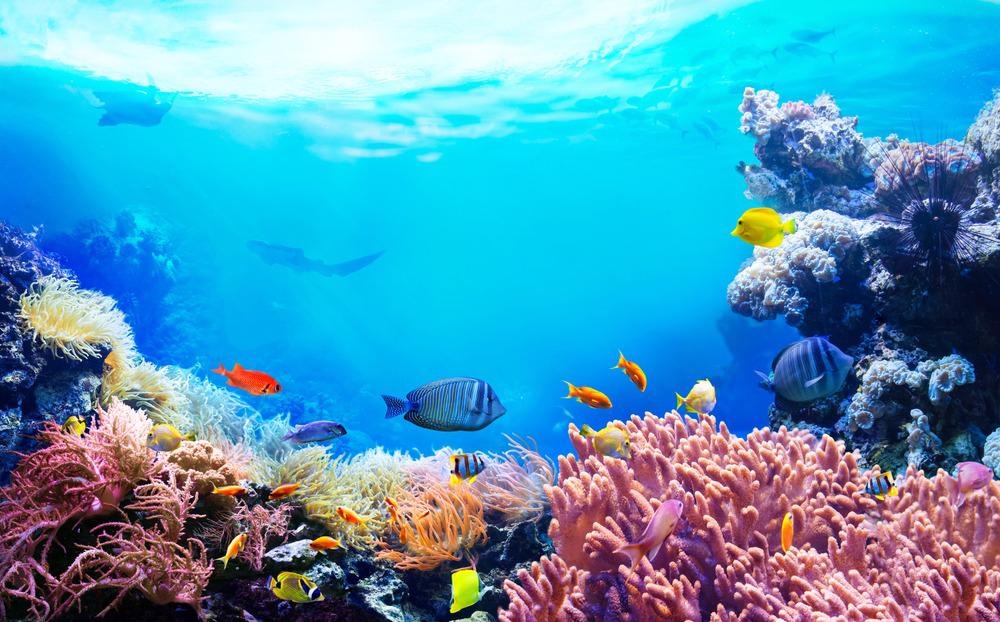 Coral reefs are located in more than 100 countries across the globe. Majority of these reefs can be found in the oceans and seas found between the Tropics of Cancer and Capricorn. These water bodies are the Indian Ocean, the Pacific Ocean, the Red Sea, the Caribbean Sea, and the Persian Gulf.

Corals can also be found in other areas that are located away from the equator. Mostly, in areas where the warm currents move away from the tropics. These areas include southern Japan and Florida. It is believed that all types of corals in the world occupy approximately 284,300 square kilometers.

How the various types of corals grow

It fist begins with coral larvae, which are swimming openly, attaching themselves to rocks or hard surfaces that have been submerged in the ocean. These surfaces are usually located at the edges of the islands or continents.

Then, the coral polyps secrete skeletons from under their skin. These skeletons comprises of calcium carbonate components. They usually act as a protective barrier against predators. They also have substrates on which infant coral polyps can attach themselves to. The process of growing a skeleton is usually energy-demanding. The algae flourishing in the corals’ tissues provide this energy.

The various types of corals mature along different timelines. The factors that you need to take into consideration are salinity, water temperature, turbulence, and abundance of food. Corals which are large in size usually take longer to grow. There is an estimation that they only grow between 0.2–1 inch in length annually. Staghorn and branching corals tend to mature at a faster rate. They grow up to a length of 8 inches on their branches annually.

Threats facing the various types of corals in the world

Despite only occupying less than 0.1 percent of the earth’s surface, corals are the most biologically diverse ecosystems in the world. Unfortunately, they are also facing extinction making them to be categorized as endangered species.
In recent years, coral reefs have come under heavy exploitation. They are facing both global and direct threats with the global threat being warming of waters. Direct threats include water pollution and overfishing.
All these harbor the replicating capacity of these coral reefs. The conditions for them to thrive in are under threat because of these activities.

All the above mentioned types of corals are very vital in maintaining both the aquatic ecosystems and the human civilization. It is quite tremendous that something that supports over 25 percent of the oceans’ population only occupies less than 1 percent of the earth’s surface. It is a very important habitat for all these species. Amazingly, these coral reefs are the ones that form the sand we step on along the beaches.

Moving from South Africa to the UK

How to Make Money Online for Beginners?